METEORIC PHENOMENON AT SEA. -- Captain
CONGDON, of the ship Caroline Tucker, from Havre
Jan. 16, gives the particulars of a singular and startling
phenomenon which occurred on the passage.  The
voyage was characterized by nothing unusual, the weather
being such as is common for a Winter passage.  They
reached the meridian of the Banks of Newfoundland on
the 20th of February; the weather was dark and squally,
the wind from N.W. to N.N.W., the temperature 46
degrees, and the Barometer 30. The ship was under
double-reefed topsails, and everything made snug for
stormy weather.  On the following day, (the 21st,) when
between the southern end of the Banks, and the northern
edge of the Gulf Stream[,] the Barometer falling to 29.50,
and the atmospheric temperature changing suddenly from
59 degrees to 46 degrees, a furious squall of rain and
wind from the Southwest came up at 2 P.M., enveloping
the whole heavens in darkness; the heaviest part of the
squall continued only for fifteen minutes, at the latter
part of which a sudden report, as loud as a six-pound
cannon, was heard overhead, and the mainmast was
instantly enveloped, as by a dozen rockets falling to
the deck.  The ship was lighted fore and aft, and
several of the crew were benumbed, as by a stroke
of electricity.  The chief mate was standing some
twelve aft of the mainmast, steadying himself by
holding on to the topgallant halyards, which lead
from the masthead by a chain, and terminate in a
leading block having an iron strap, at the instant
the explosion was heard.  His arm was paralyzed,
and fell helpless at his side, as if it had been struck
by a heavy descending body, and for several
minutes it was entirely benumbed.  Several others
of the crew felt a severe shock.  On examination,
no serious injury was discovered, but the lead
about the mast-coat was ripped up, and the heads
of the copper nails brightened.  Capt. CONGDON
says they saw, several days before this, while near
the edge of the Gulf, several meteors at the
masthead -- a thing very common in the Gulf --
but there was no explosion.  The sailors call them
"_compesanis_."  But on no occasion, during an
experience of 22 years of sea, has he witnessed
so terrific an explosion, or observed such effects
from the bursting of a meteor.
Posted by Chris Aubeck at 5:30 PM No comments: 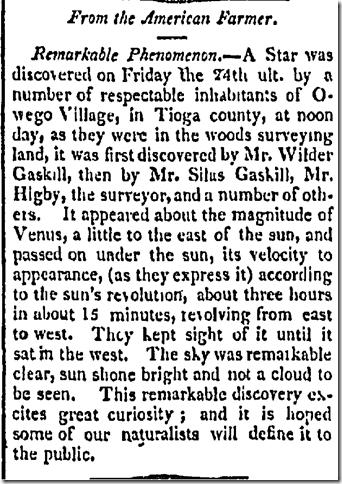 Posted by Chris Aubeck at 1:05 AM No comments:

The Campbelltown correspondent of the Invercargill Times describes the following singular phenomenon "A rather extraordinary phenomenon was witnessed here on the evening of the 21st  at about half-past 8.  At first it had the appearance of a lantern suspended in mid air, giving the onlooker the impression that it was a vessel coming into the harbor with a light at the masthead.  It appeared first just at the mouth of the harbour, and after remaining for about five minutes disappeared. In about 10 minutes it returned, further away, and this time of various colours, and after remaining for a few minutes stationary in the air it slowly began to ascend, and then, suddenly burst, as it were, into two streaks of light of all colours, and disappeared.  After this it appeared and disappeared five times in succession, assuming different shapes and colours-sometimes coming as it were off the beach, and at others rising out of the water.  It at last took the appearance of a large blaze of fire on the beach, some distance from where it first appeared, then with great rapidity it was seen to rush across the water in a south easterly direction, and  to disappear."
Finder's Credit: Kay Massingill
Posted by Chris Aubeck at 3:06 PM No comments:


The apparent diameter was estimated at about half of that of the moon. Five or six smaller ones followed the big one and like this one also radiated a green light. 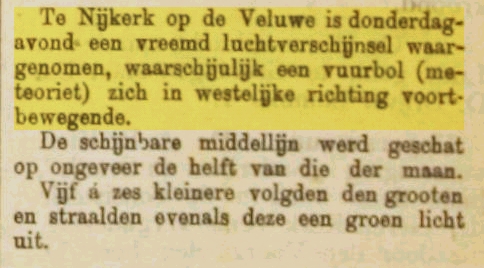 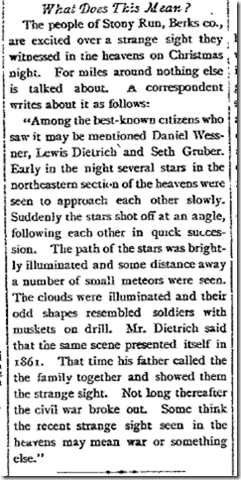 
Signs in the Heavens


[From the] Monroe Advertiser


Many people in this section were
awakened last Saturday night by the
vivid and almost incessant lightning
in the northwest. Soon after a strong
wind from the same direction sud-
denly sprang up, blew for a few minutes,
and then as suddenly ceased. Those
who noticed these reconized (sic) the fact
that they were phenomenal; but there
was another sight seen by Mr. W.
P Ponder and his family, which was
far stranger, and was different from
anything we have ever heard of.


About one o'clock a young lady
in Mr. Ponder's house was awakened
by a light so bright that she was sure
the house was on fire, and she ran
down stairs and gave the alarm.
Finding that the house was not bur-
ning, the family thought the woods
were on fire; but a minutes invseti-
gation (sic) showed this to be a mistake.
The cause of the brilliant light
was discovered, and it caused the
spectators to gaze with wonder and
awe. Above the eastern horizon--a
little north of east--about where the
sun would be, if an hour high, was a
brilliant light, apparently about
the size of a full moon. It looked
like a large star, its light white like
that of the sun or of an electric
lamp. At intervals it would expand
and throw out luminous rays in all
directions, making the surrounding
brightness still brighter; and then it
would immediately contract again to
its former size. The light was as
bright as sunlight, and objects could
be seen as plainly as in the day-time.
The sky to the south was especially
bright. The body of light was appa-
rently stationary. Mr. Ponder's fam-
ily wathed (sic) it about an hour, and then
retired, leaving the mysterious lumin-
ary still blazing in the heavens. What
was it?


Finder's Credit: Rod Brock
Posted by Chris Aubeck at 7:41 AM No comments: